My last week was a bit disappointing viewed from the point of view of a birder. Highlights were a couple of Teals in the harbour of Bamberg and a flock of Long-tailed Tits in my garden.

Nevertheless I had been looking forward to this morning, since in theory I would have had a lot of time for birding. As it turned out it was very windy this morning, even so windy that I wasn´t sure, if it really was that a good idea to spend the whole morning exposed to the wind on the shore of a lake.  However when I realised what birds I could miss then, I was soon convinced.

At first the wind didn´t seem to be so nasty as I thought, at least till I reached the bridge across the Main, where the wind pushed me constantly towards the handrail next to the cycle path. The next few kilometers were a lot easier to go and I finally spotted the first birds on the meadows: two Great White Herons. Unfortunately they stayed out of range for a good picture and so I kept going on.

After a while I arrived at the lake and got immediately aware of some Canada Geese feeding on a nearby field, altogether 169. Among them I detected also a hybrid, most likely Greylag-x-Canada Goose. Over the last years Canada Geese have spread increasingly and therefore also abnormal looking individuals, which are sometimes believed to be hybrids. A good indicator for telling a goose-hybrid apart from those aberrant geese is the colour of the legs. Canada Geese have black or at least dusky feet, while the geese of the genus Anser are showing orange or pink feet. In the most cases a hybrid Anser-x-Branta has orange or pink feet and can therefore easily be told from an abnormal Canada Goose.

Apart from that the lake was not as interesting as I had hoped: Few ducks and Coots, almost no herons or grebes. Nice to watch was a Peregrine Falcon on the opposite shore showing twice its spectacular dive. When I moved a bit closer to the shore, a flock of Gadwalls flew up, which I hadn´t been able to see before because of the steep shore. Finally, already on the way back home, I came across a flock of passerines, which always flew around and was never staying at one place for a longer time. The most were certainly Goldfinches, but I also heard the calls of a Siskin and of a Brambling. When all had come out of view I started my long way home fighting once again against the nasty west winds. 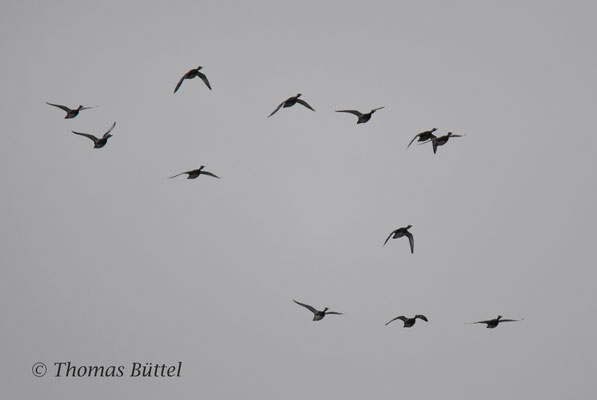 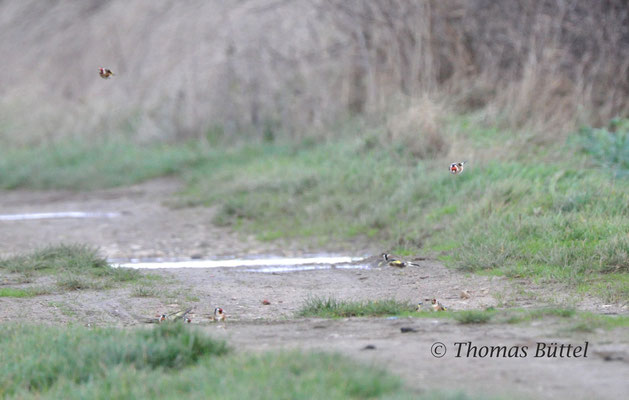 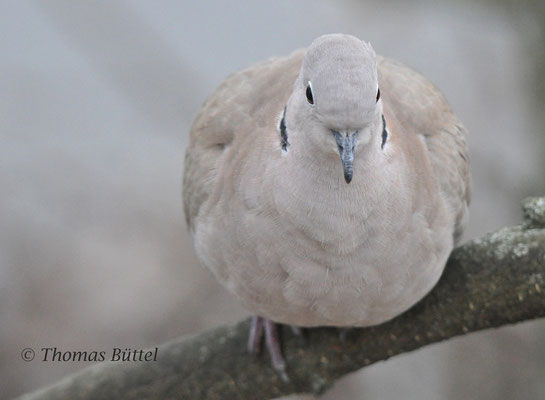