The last week has been extremely cold with a minimum of -19 °C in one night. Now any lake nearby I know of is definitely frozen and totally unattractive to water birds. Furthermore birding isn't particularly comfortable when it is so cold. Hence I waited for the temperature to rise on the weekend, which turned out to be a good plan. On the last Saturday I went to a new birdingwatching site I haven't been yet, a barrage of the river Danube situated perhaps 30 km west of Ingolstadt. The weather was really nice, however I hadn't considered the backlight there in the afternoon, which created a wonderful lighting mood but was rubbish for observing birds. Nonetheless it has been a pleasant trip, especially as I saw two rather surprising birds.

Generally said the most birds were rather common like Tufted Duck, Goldeneye and similar species, yet they were present in good numbers. The Danube was still half frozen and so all birds were focused on the remaining ice free areas. Therefore it wasn't easy to get an overview of the whole situation, but after a while of concentrated watching I was rewarded with a Velvet Scoter. In Southern Germany this species is a really scarce guest in the winter and this individual was actually the first I've found myself. Unfortunately it was distant and so I didn't have any chance to get a good picture of it.

With this find I was all over pleased and didn't expect to find something equally good any more. Yet a couple of minutes later I spotted a lonely large gull flying along the ice, that looked strange even from the distance. It's general brownish appearance and the particularly light upper wings pointed to an immature Herring Gull. After it had landed on the ice, I took a look through my scope and could soon confirm my initial suspicion. It's really surprising that this was the only large gull on site, whereas both Yellow-legged and Caspian Gull are far more common in Bavaria. 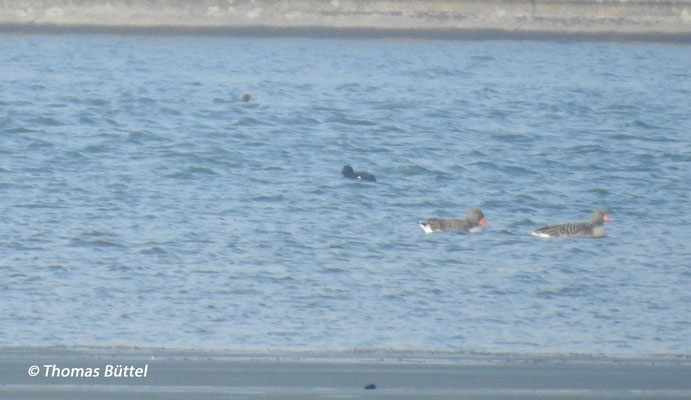 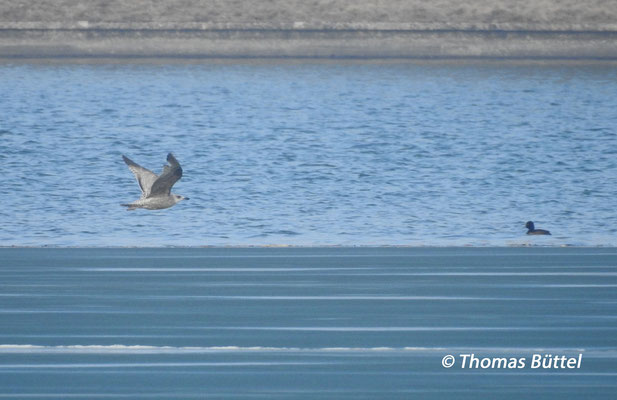